Hey why is my 3rd party keyboard not working on iOS?

Long time that I had time and inspiration to write a new blog, next to the video’s on my Enterprise Mobility Tips YouTube channel. This time a short tip for when you are managing iOS devices with Microsoft Intune.

Third party keyboards are supported since iOS 8 which was released in 2014, and are basically apps that you need to install from the Apple App store. Very popular third party keyboards on iOS are for instance Google Gboard, SwiftKey, Microsoft Word Flow and many more.

Third party Keyboards can have features like that you can swipe the keyboard to write, like we had on the latest Windows mobile devices and of course already many years on Android.

My customer reported an issue that the Third party keyboards could not be used on devices that were enrolled into Microsoft Intune and therefor MDM-managed. All other apps, that were not managed could just use the third-party keyboard without any issue.

But in this case the policy was already allowing the keyboard, and the keyboard could also not be used in the native mail client of the iOS device. So for some reason iOS is blocking the 3rd-party keyboard to be used in managed apps.

A quick analysis of the issue learned me that the fact that the keyboard doesn’t show up, is that if you use the native data separation controls in iOS (in Intune called “Block viewing corporate documents in unmanaged apps”) you can separate work data and personal data. A lot of companies require the reparation of work and personal data and therefor this control is almost always used.

The 3rd-party keyboard is threatened as an unmanaged app and therefor cannot be used in managed apps, which is logical if you ask me.

After pushing or installing the 3rd-party keyboard the app becomes part of the Management Profile and will be listed as shown below.

After the Gboard app is part of the Management Profile, Outlook and all other managed apps can make use of the app without lowering the security level.

Next to sharing tips via blogs I try to also share tips via my Enterprise Mobility YouTube ( https://www.youtube.com/c/EnterpriseMobilityTips ) channel. Make sure to watch the tips and subscribe to the channel!

@pdaalmans
1K Following
5K Followers
So awesome to be back at #MMSMOA! I will leave my crutches at home :) Join me an many other great minds this May at… https://t.co/72EKhUp1uL
9 days ago
Follow 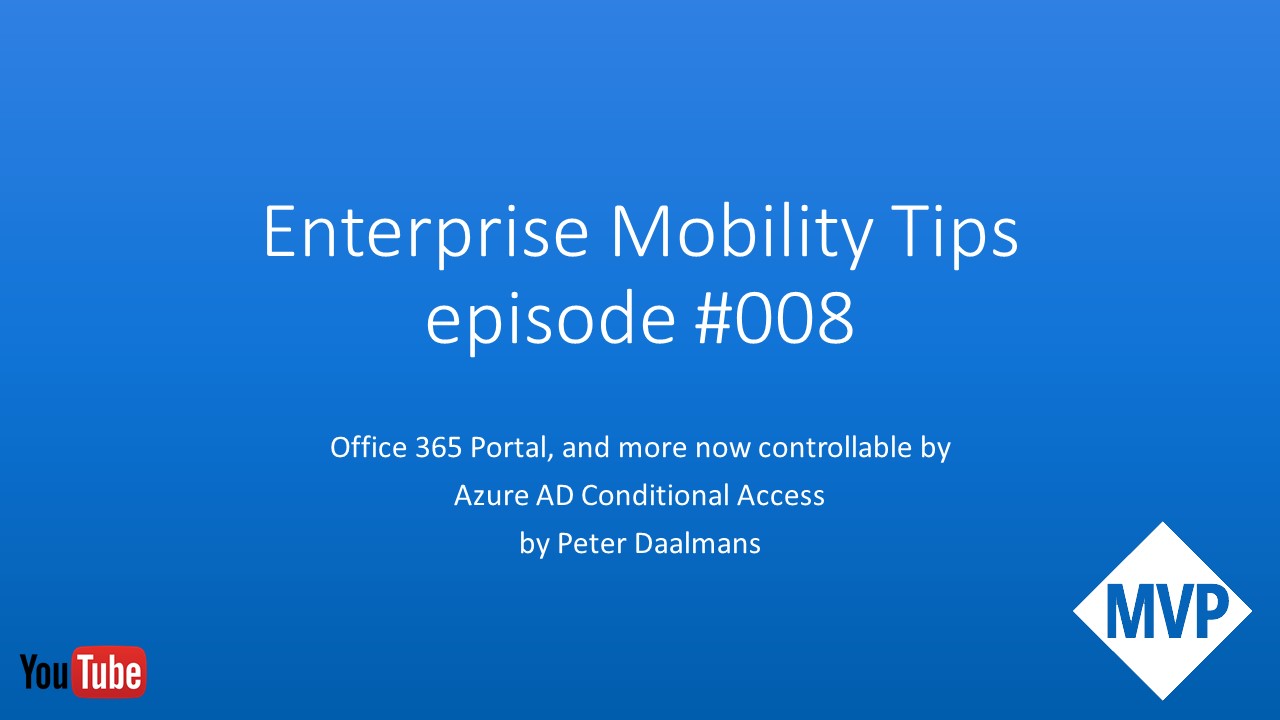 Has been a while that I created a new tip for my Enterprise Mobility Tips YouTube channel, but…

What to do when you are suffering from a jetlag after a great MVP Summit and MMS? Write…

This website uses cookies to improve your experience while you navigate through the website. Out of these, the cookies that are categorized as necessary are stored on your browser as they are essential for the working of basic functionalities of the website. We also use third-party cookies that help us analyze and understand how you use this website. These cookies will be stored in your browser only with your consent. You also have the option to opt-out of these cookies. But opting out of some of these cookies may affect your browsing experience.
Necessary Always Enabled
Necessary cookies are absolutely essential for the website to function properly. This category only includes cookies that ensures basic functionalities and security features of the website. These cookies do not store any personal information.
Functional
Functional cookies help to perform certain functionalities like sharing the content of the website on social media platforms, collect feedbacks, and other third-party features.
Performance
Performance cookies are used to understand and analyze the key performance indexes of the website which helps in delivering a better user experience for the visitors.
Analytics
Analytical cookies are used to understand how visitors interact with the website. These cookies help provide information on metrics the number of visitors, bounce rate, traffic source, etc.
Advertisement
Advertisement cookies are used to provide visitors with relevant ads and marketing campaigns. These cookies track visitors across websites and collect information to provide customized ads.
Others
Other uncategorized cookies are those that are being analyzed and have not been classified into a category as yet.
SAVE & ACCEPT
Total
4
Share
4
0
0
0
0
0
0
0
0