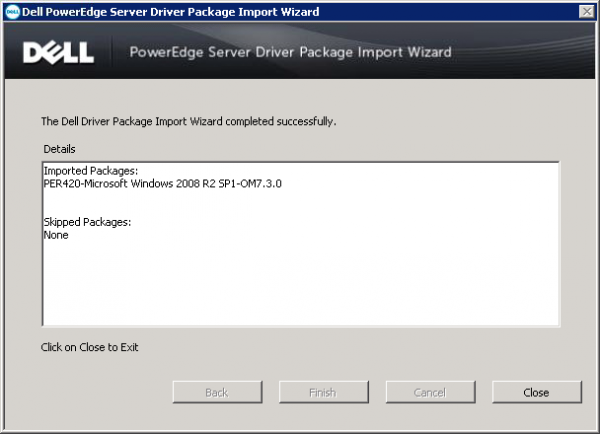 Last week I came in the situation that I needed to test and use the Dell Server Deployment Pack for the first time. Part of the Dell Server Deployment Pack is the Dell PowerEdge Server Driver Package Import Wizard. This wizard helps you import driver packages based on operating system for a Dell PowerEdge system. Also part of this Pack is the ability to create special boot images and the ability of using special support scripts. Because of the fact that the customer is still on ConfigMgr 2007 SP2 R3 this blog is based on the ConfigMgr 2007 version. The Dell PowerEdge Server Package Import Wizard is also available for ConfigMgr 2012, more on this in a later blog.

After installing the Dell Server Deployment Pack you will see that extra actions in the management console of ConfigMgr 2007 are added. Let’s have a look at the actions and look at the options you have to use them.

Creating the boot image can be done based on three scenarios, all will include the drivers that come with the Deployment Toolkit.

After selecting the option to import a Dell PowerEdge Server Driver Package you need to point to the Systems Management Tools and Documentation DVD ISO which you can download at the Dell website. This ISO will contain all the drivers from most of the Dell PowerEdge server models and Windows operating systems that are supported.

After the wizard is done, it has created a special driver package which you can use in your task sequences that you use for the Dell PowerEdge Servers.

Some considerations about using this pack:

Want to get rid of your ConfigMgr 2012 Central Administration Site?

@pdaalmans
1K Following
5K Followers
So awesome to be back at #MMSMOA! I will leave my crutches at home :) Join me an many other great minds this May at… https://t.co/72EKhUp1uL
6 days ago
Follow

System Center Configuration Manager 2012 Beta “How Do I?” Videos

The System Center Configuration Manager team of Microsoft released a couple of “How Do I?” videos during MMS…

After moving your Configuration Manager 2012 database via the Detach and Attach method, you might run into some…