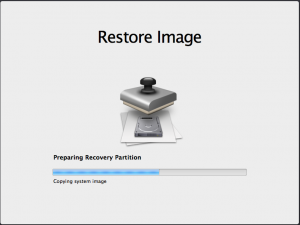 To be able to support Operating System Deployment for Mac OS X devices we need to set up the Netboot integration with our PXE Enabled Distribution Point.

Setting up the Netboot integration is done while installing the plugin. No real configuration needs to be done to get it working.

After everything is set up correctly, you need to add a Mac OS X image to Configuration Manager 2012 R2, this is done by creating the NetBoot image folder whose name ends with .nbi.

In this folder the following files are stored:

If we exit the preferences and reboot the Mac client via Netboot by pressing N while booting the Mac, the Mac will boot into the OS X Installer

In the OS X Installer you are able to select the target disk (in my case the Untitled disk) and click Install. After selecting Install, the installation of the image provided by Configuration Manager 2012 R2 will be installed.

After the installation is finished you need to go through the Welcome wizard and setup your Mac for your needs and deploy the Parallels Client via the discovery method.

In this blog you quickly saw how to upgrade Mac OS X 10.7.5 to Mac OS X 10.9.3 using Configuration Manager 2012 R2. How cool is that? 😉 Okay the very rich OSD experience we have with deploying Windows Operating Systems is not the same but this can be considered as a good start if you ask me.

In the next, and for now last blog, I will have a look at the new features that have become available with the release of Parallels Mac Management for SCCM 3.0.

See ya next time.

Earlier blogs in this series:

@pdaalmans
1K Following
5K Followers
So awesome to be back at #MMSMOA! I will leave my crutches at home :) Join me an many other great minds this May at… https://t.co/72EKhUp1uL
7 days ago
Follow

ConfigMgrBlog.com, the figures of 2014

As mentioned in the first blog of 2015, it was a very good year, but how did my…